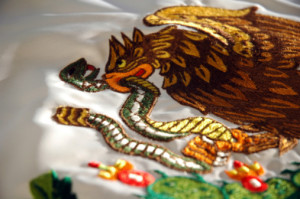 The Mexican coat of arms is a long-standing symbol of the country’s culture, legends, and politics.

The Mexican coat of arms owes its origins to an Aztec legend. According to the legend, the leader of a nomadic tribe was visited by a god named Huitzilopochtli in a dream. The leader was told by the god that the tribe would come across an eagle, perched on a cactus, devouring a snake. They were ordered to settle wherever they found this eagle. The tribe did so in 1325, despite the swampy conditions of the area. This land would become Tenochtitlan, which is now called Mexico City and is one of the largest cities in the world.

It would be centuries before the iconic image of the eagle holding a snake on top of a cactus became the Mexican coat of arms. In 1811, during Mexican’s war for independence from Spain, a Mexican eagle became a popular seal for official documents. Revolutionary leader José María Morelos y Pavón would later add the eagle to his flag. Once independence was finally won, the eagle was redesigned to reflect the famous legend.

Next time you spot the flag of Mexico, take a moment to look at the Mexican coat of arms. Here at Acapulcos Mexican Family Restaurant and Cantina, we take great pride in what the flag of Mexico and the Mexican coat of arms represent. We value authenticity of Mexican culture and cuisine. If you’re ever in the mood to experience an authentic Mexican restaurant, feel free to drop by in one of our twelve Massachusetts or Connecticut locations. We would love to have you!