Are you in the mood for something delicious, deep-fried, and sweet? 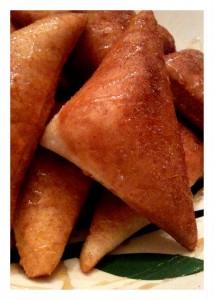 Sopapillas may be the answer to the quest you are on. Sopapilla is a deep fried dessert that taste buds tingle over! Its deep-fried crust and tasty fillings make the dish irresistible.

The Sopapilla is a popular Mexican dish that can be prepared with a variety of twists. It can be served as desserts or entrees; either sweet or salty. However, the Sopapilla’s most common form is the sweet pastry. This tasty dessert completes a hardy Mexican meal, complimenting the bursting ingredients of Mexican dishes. The article below from EHow explains the history of the Sopapilla and its variations.

The History of Sopapillas

Sopapillas are a popular Hispanic dish in South America and New Mexico. The deep-fried pastries can be served as a dessert, covered with honey or syrup, or as an entree, stuffed with meat, cheese and peppers.

A sopapilla is a crispy, deep-fried pastry. It is often served covered with honey or syrup. The pastry is common in Hispanic culture and is a favorite among many Hispanic cuisines. Sopapillas can be served salty or sweet.

Sopapillas are thought to have originated in Albuquerque, New Mexico, more than 200 years ago. There are a few stories attributed to the name of the pastries. It is thought to come from the Spanish word “sopaipa,” which is used to refer to sweetened fried dough, or from the word “xopaipa,” which means bread soaked in oil.

New Mexican sopapillas are made from tortilla-like dough. The dough is fried until it is puffy and a small air pocket appears within the pastry. In New Mexico, sweet sopapillas are often covered in honey or some kind of syrup and powdered sugar. Stuffed sopapillas are also popular in New Mexico. They are prepared the same way but instead of honey and sugar, the pastries are stuffed with ingredients such as refried beans, cheese, peppers and meat.

This tasty, classic dish is popular because of the different routes you can take with it. Whether you’re looking to stuff your Sopapilla with meat, beans, honey, sugar, or cheese, this dish is sure to please your taste buds!

At Acapulcos Mexican Family Restaurants & Cantinas we serve the Sopapilla pastry, dusted with cinnamon sugar. To sample our Sopapillas for yourself, or to try out any of our other Acapulcos dishes, stop by any of our 12 locations in Massachusetts and Connecticut. We are here at your service!