The Mexican culture is rich with traditions and foods, and one of those traditional dessert dishes is flan. 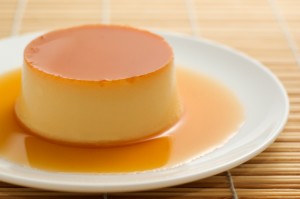 The perfect flan is can be molded and flavored to any person’s preferences. The versatility of flan makes it a very popular dessert for any occasion, and being able to create the perfect flan will certainly extend the requests you receive to serve it. The article below from allrecipes.com includes a recipe for the perfect flan so that you too may enjoy this delicious dish at home.

Flan is a vanilla-infused custard with a sweet caramel top layer, but–like all custards–it easily embraces other flavors. Chocolate, coffee, orange, and coconut are all delicious variations.

Sugar can be cooked two ways: “wet” or “dry.” Wet cooking is the easier method, because it gives you greater control over the degree of caramelization.

Dry cooking usually involves adding an acid, such as lemon juice, to keep the sugar from crystallizing.

For either method, as soon as the caramel reaches a deep golden brown, remove it from the heat and pour it into the dish or dishes in which you will be baking the flan. (It will continue to cook once you pull it off the heat, so don’t let it get too dark or the caramel will taste bitter and burnt.) Be very careful to avoid burns.

Baking custards in a water bath is crucial, due to their delicate nature. The water insulates the custard and keeps it from cooking too fast, which causes cracks in the finished flan and a rubbery texture. Lay a dishtowel on the bottom of a roasting pan, place the flan dish or dishes on top of the towel, and then fill the pan with boiling water about halfway up the sides of the custard cups.

Out of the oven

The flan is ready to be removed from the oven when it has begun to set. Gently shake the pan: the centers of the custard should jiggle slightly. You can also insert the tip of a knife into the custard near the center; if the flan is still liquid, it needs more time in the oven. When the flan has begun to set, remove the roasting pan from the oven, being very careful not to spill the hot water. Let the flan cool while sitting in the water bath, until the ramekins are cool enough to handle. Refrigerate before serving.

The caramel, which set up hard in the bottom of the dish, will have softened due to the moisture in the custard. You should be able to slip each custard out of its cup with ease: run a butter knife or the tip of a paring knife around the edge of the ramekin to release the flan.  Invert a small dessert plate over the ramekin, turn it over, and gently remove the dish. You should have a creamy, picture-perfect flan crowned with a syrupy golden caramel.

Flan is a perfect canvas for a dessert-lover who enjoys experimenting with flavors!

While creating the perfect flan takes practice, its versatility means that for any occasion you can decide what will make it a perfect flan for that event. You can change it’s shape, flavor, and overall general presentation, making it a versatile choice for any party or event. The perfect flan is incredibly delicious — which just adds to its draw. Keep in mind that even if less than perfect, flan is a delicious dessert!

With this recipe you have the base to start making your own perfect flan. With repeated attempts and experimenting, you will eventually find the variations that appeal to your own taste buds. Then again if you haven’t tried flan or maybe you aren’t in the mood to experiment, we offer what we would consider the perfect flan at all 12 of our Massachusetts and Connecticut locations. At Acapulcos Family Restaurant & Cantina, we are extremely proud of our old family recipe that creates our perfect flan as well as all of our other desserts and meals!

Honey and cinnamon. 🤤 Heaven in a dish! 😍

Your taste buds are calling! 🌯 Takeout is avail

CHIPper up it's almost Friday! 🥳

Raise your hand if you think guac makes everything

You had me at tacos! #tacotuesday 🌮

Who else is ready for Margarita Monday?! 🍹😍