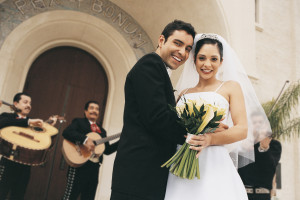 If you’re planning a traditional Mexican wedding or want to know what to expect when attending one, here are a list of Mexican wedding traditions and their meanings. Many are influenced by Roman Catholic beliefs introduced by the Spanish, but have been mixed with the traditions of the native Aztecs.

The bride chooses the color scheme of the wedding, which appears all over the ceremony, including on the wedding cake. The color scheme is incorporated into flowers and paper decorations that can be placed along the pews and the bridal path.

Much of traditional Mexican wedding clothing has been inspired by the Spanish. The bride will wear a mantilla veil, slim dress, bolero jacket, or even a Flamenco-style dress with ruffles at the hem. She also wears a light blue slip under her dress. Instead of flowers, she’ll carry a fan.

The groom may choose to wear a matadorian outfit of a bolero jacket with tight fitting pants. More traditionally, he would wear linen outfit of a Mexican wedding shirt, also known as a “Guayabera,” with loose, drawstring pants.

This tradition has a long history linked to Rome and Spain before coming to Mexico. Thirteen gold coins represent Christ and the 12 apostles. After being blessed, the coins are presented by the groom to the bride in an ornate box. The term “arras” means “earnest money” and represents the bride’s dowry price. By giving the gift, the groom promises to provide for his family and by accepting it, the bride shows that she trusts him to do so.

After the couple has exchanged vows, a large rosary is draped around the shoulders of the groom then the bride in a figure eight that symbolizes infinity. The rosary symbolizes how they will stay together, side by side.

Originating in Europe, the money dance involves men “paying” to dance with bride during the reception. The men put the money in a special bag or pin it to the bride’s clothing. It’s understood, however, that this is a way for guests to gift generous monetary gifts that will be used by the couple to get established in their new home together or pay for expenses from the honeymoon.

The traditional foods at a Mexican wedding reception include chicken, pork, spicy rice, beans, and tortillas. As for the desserts, the wedding cake is traditionally soaked in rum and made with nuts and dried fruit. Mexican wedding cookies are pecan or almond cookies that are rolled in sugar. A candy-filled pinata in the shape of a heart is usually provided for children at the reception.

After the reception, this celebration continues the wedding festivities. It can take place well into the night on the same day as the wedding or the next day. Because Mexican weddings are typically so large, this can be a more intimate gathering of people very close to the bride and groom. It can also help include others in the celebration of the wedding if the wedding location is far away.

If you’re interested in experiencing an authentic Mexican celebration and flavors, be sure to visit Acapulcos in our many locations throughout Massachusetts and Connecticut.