Homemade burritos make a great meal and can be a fabulous addition to any dinner party. 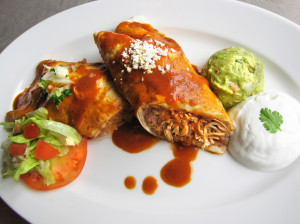 However, they are a lot less fun to eat if you have to worry about the burrito falling apart and spilling the filling all over your hands and shirt. Then you may still be hungry, but you have a mess to clean up. Fortunately for you and your kitchen floor, there are some steps that you can take to securely fold a burrito.

How to Fold a Burrito: Step 1

The first thing to do is make sure that you have a good sized tortilla. 10 to 12 inch tortillas typically work best to prevent the innards from making holes in the tortilla. It’s also very important to heat the tortilla up before filling. You can do this by putting it in the microwave for about 10 to 20 seconds or in a skillet over low heat. A warm tortilla is much easier to fold and is less likely to break. Be careful not to let the tortilla get too hot or start to crisp, because then it could break.

How to Fold a Burrito: Step 2

Next you’ll want to add the fillings. The trick to this step is not to overstuff it. It may be tempting to try to pile on as many of your favorite fillings as you can, but it is going to make it more difficult for you to fold the burrito. If you want, make two smaller burritos rather than one overstuffed one. Place your chosen fillings in the center of the tortilla and make sure that there is plenty of room left on the sides.

How to Fold a Burrito: Step 3

It’s a good idea to “test” the tortilla at this point and make sure that you haven’t filled it too much. If the burrito is going to fall apart, it is better to find out now and not when you’re serving it to your friends. You can check by folding up the top and bottom ends of the tortilla and holding it over the plate. If the fillings do not break through the bottom, put the tortilla back down on the plate and proceed to step four.

How to Fold a Burrito: Step 4

Now it’s time to start folding. Fold the left and right sides over the fillings. After that, bring up the side of the tortilla that is facing you. Pull it tight and tuck it under the fillings.

How to Fold a Burrito: Step 5

Roll the burrito forward to create the spherical shape. Let the burrito lie face down on its “seam” for a few moments. This will help seal it shut. Sour cream is a great “glue” for your burrito. Finally, you’re ready to eat!

While you now know the secret of how to fold a burrito, it is still an art that needs to be perfected over time. It may take you a couple of tries before you fully get the hang of it, but don’t get discouraged. If you are still having a hard time trying to fold a burrito, feel free to stop by Acapuclos Mexican Family Restaurant & Cantina. We’ll be happy to build and fold a delicious burrito for you at one of our locations in Massachusetts and Connecticut. We serve authentic Mexican cuisine daily.

Now that you know how to fold a burrito, do you think you will be more likely to make them at home? What types of occasions would like to serve burritos?