Have you ever seen the type of brightly colored Mexican art that is made from a mosaic of tiny beads or colorful strands of yarn? 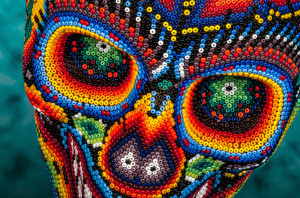 This traditional craft is referred to as Huichol art, due to its creation by the Huichol Indians of western Mexico a long time ago. Theses Huichol pieces of artwork are incredible to look at because of their intricacy and vibrancy. Typically based on the shapes of animals, Huichol art tends to hold a lot of symbolism along with its beauty.

To learn more about Huichol art, continue reading the following article from Yahoo! Voices, which describes how Huichol art came to be.

The Huichol Indians of western Mexico have been producing art for many thousands of years. It’s a part of their everyday lives-as are the myths and symbols it illustrates-and is made by everyone, including children. It’s generally called nieríka, which is difficult to translate but essentially means “mirror of the Divine.” This term is used to describe an object that has a sacred meaning-which means it can be applied to most Huichol art.

Huichol artists use as their inspiration the world around them-much of which they consider sacred-as well as their dreams, and the visions they experience while under the influence of peyote, a desert cactus that contains mind-altering substances. Almost everything about their art is symbolic, from the figures and stories represented to the colors used, which are usually deep and vibrant. Animals seen frequently in Huichol art include deer, eagles, birds, scorpions, jaguars, and turkeys. Flowers and plants are also common-especially the peyote, which is considered sacred.

There are many different kinds of Huichol art, including embroidery, weavings made on backstrap looms, masks adorned with beads, gourd (prayer) bowls, and yarn paintings. Embroidery-cross stitch-is a recent introduction, having been taught to Indian children in Catholic boarding schools by the nuns there. It’s used in large quantities on clothing. Backstrap weaving, on the other hand, is very old, dating back to pre-Colombian times. It’s taken quite seriously, with training that compares to that of an apprentice shaman. It’s primarily done by the women, as is embroidery.

Gourd bowls, called xukúr, are decorated on the inside with symbols made from yarn pressed into wax. They are considered to be female, representing mother goddesses, because their shape resembles that of a womb. They are also believed to be the best way to communicate with the Divine, perhaps because they can be filled with objects that symbolize the petitioner’s needs and desires.

The Huichol produce other items, include finger-woven beaded jewelry and “eyes of god” (ojos de Dios). But it is their yarn paintings that have caught the attention of the outside world-which is understandable, considering that outsiders first suggested them.

Huichol artists at one time carved designs on large stone slabs and then colored them with natural dyes. These were noticed by visitors who wanted to buy them, but because they were made of stone, they were difficult to transport, as well as being extremely time-consuming to make. The Huichol were open to other opportunities to show their art, though, because it was a way to supplement the meager income from their farming. It was suggested that they apply the technique they used for their gourd bowls to a flat surface-and yarn paintings were born.

To make a yarn painting, the artist uses a wooden board with beeswax spread over its surface. The design is either traced on the board (where it will show through the wax, which is transparent) or scratched into the wax. The wax-covered board is then left in the sun, and when the wax has softened the design is filled in with yarn pressed into the wax.

The Huichols prefer to use natural materials in their art, but in the case of the yarn used they’ve made a concession, and now use synthetic commercial yarn rather than handspun wool (probably because of the larger quantities and colors available). However, when it comes to the wax they still insist that it come from a particular bee indigenous to the area. This bee is sting less and builds smaller hives, so its wax is produced in smaller quantities. But the Huichol are serious about using it, because they consider this bee to be sacred.

Yarn paintings started out small-less than 12 inches square-because the board used was very heavy. The transition to lighter board allowed the paintings to grow in size, so that they now can be as big as several feet across.

Huichol yarn paintings are now shown in galleries and sold by dealers. There is an exhibit of work by the renowned shaman-artist José Benítez Sánchez at the University of Pennsylvania Museum of Archeology and Anthropology. The Huichols, isolated for many thousands of years in the mountains of Mexico, are now being recognized around the world for their art-including a style of painting that is unique to their culture.

The Huichol people have contributed a lot to Mexican culture and art, and their vibrant style can be found frequently at authentic Mexican art vendors.

If you are interested in learning more about authentic Mexican culture, Acapuclos Mexican Restaurant & Cantina is the perfect place to experience traditional Mexican food and drink. With 12 locations in Massachusetts and Connecticut, you can enjoy our family-oriented atmosphere while tasting authentic Mexican cuisine right here in Northeastern America. We would love to share Mexican culture with you, your family, and your friends.

Have you ever attempted to make Huichol-styled art? Was it difficult or easy? We’d love to learn more by seeing your input in the comments section below.

Honey and cinnamon. 🤤 Heaven in a dish! 😍

Your taste buds are calling! 🌯 Takeout is avail

CHIPper up it's almost Friday! 🥳

Raise your hand if you think guac makes everything