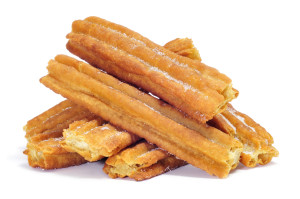 It’s not really clear where exactly churros came from. The most common theory is that the Portuguese brought them to Europe from their trading trips to the orient. However, it’s also believed the Ming dynasty passed a law that sharing the secrets of the churros ways with foreigners was an offense punishable by death. Somehow the Portuguese were able to replicate the generally idea but never learned the Chinese technique for “pulling the dough.” Instead, they mold their churros in a star shape which is often seen today.

Whether it was the Portuguese via the Chinese or some malcontent Spanish shepherd on the backside of a mountain somewhere (as some claim), we are grateful for the invention of the churros. These little fried snacks are simply delicious. They can be had for breakfast or enjoyed as a snack after a meal.

The original recipe is from allrecipes.com.

With churros holding a place in the heart of bakers in Spain, France, the Philippines, Southwest United States and many other places, they have seen many variations and adaptations. Here is another delicious version of the churros, perfect for a banana lover.

Next time you want a treat for breakfast or a snack which will make you forget your own name, try one of these churros recipes. Or if you want a fresh, authentic Mexican meal and don’t feel like cooking, you can check out our menus at Acapulcos Mexican Family Restaurant and Cantina. We have many locations throughout Massachusetts and Connecticut, serving churros, authentic Mexican dishes and margaritas. Check out our locations and find an Acapulcos Restaurant near you.